We have a number of non-equine animals at our farm that are almost as well known as our ponies!  Other than being our cherished farm pets, they are also an extremely valuable part of the unique environment that our ponies are raised in.

After tragedies when some of our treasured pets were lost to foxes and feral cats, we decided to include a maremma sheepdog in our menagerie to look after the poultry and to keep predators away.  Bear’s parents are both successful working dogs at a free range poultry farm and we were told that so far Bear’s mother has “only killed three foxes”! We selected Bear from a large litter of identical puppies because he weas the one who preferred us to playing with his friends.

His name is Bear because he looked so much like a polar bear when he was a little puppy, and because he has huge paws. When he was still a young puppy Bear chased away the feral cat family which was living under our verandah, and his duties to tell us about intruders and visitors are taken very seriously.  He is commonly seen out in the paddocks with the ponies, or near the chooks (who just wander around him casually!)  Bear has been at every single foaling since he arrived at the stud, and we often have to keep the stable door slightly ajar so he can bond with the newborn.  The mares know he is there to look after them, and there are usually one or two foals each season who will play chasey and hide & seek with him too.  He has recently become an approved canine blood donor for our local vet hospital too. 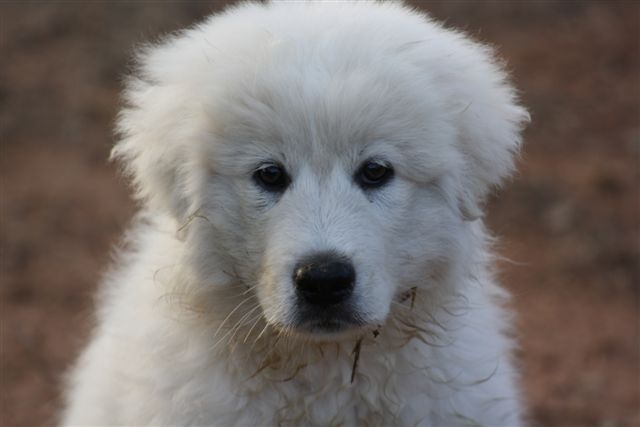 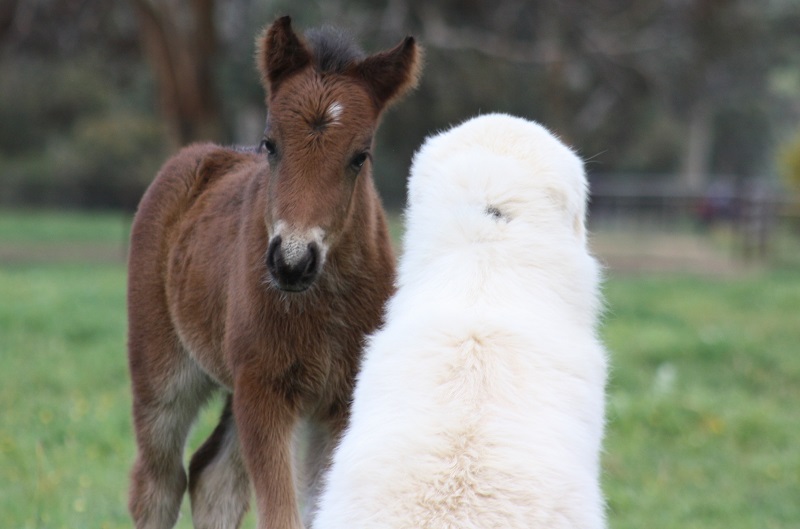 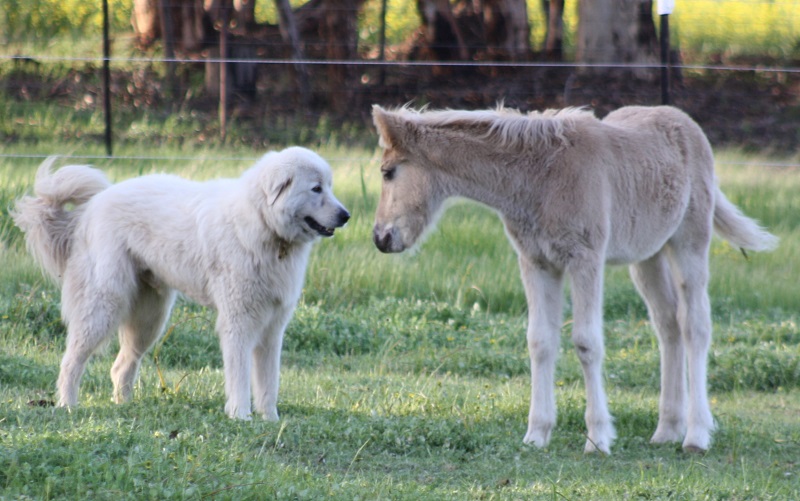 We always have a range of bantams and egg laying hens to provide us and friends with eggs, to eat the scraps and to help turning garden waste into compost. Bantam breeds include pekins and silkies, and egg laying hens are blue egg layer aracuanas and brown egg layer hylines.  Our broody chooks hatch their own eggs so we now have crossbreeds of those varieties as well. Free range eggs of varying colours and sizes are our most popular gifts of produce from Powderbark Stud.

We have exhibited our poultry with success in local agricultural shows, and we regularly sell our young stock. 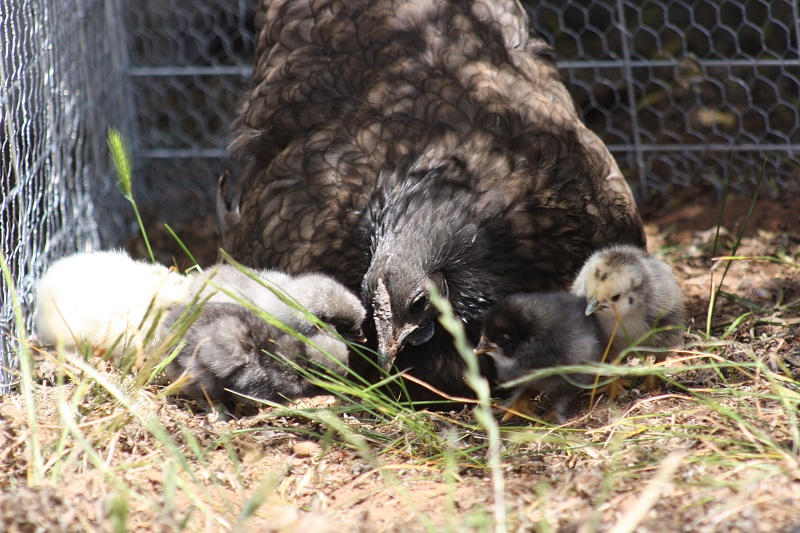 Mia is the Number 1 cat at the farm, and how she came to be with us is an interesting story. Carlisle was on an outing with the York Garden Club to Mia Flora Nursery, and the owners at the Nursery told her that they had found a kitten dumped near the front gates a few days earlier. Carlisle was offered the kitten since the Nursery owners couldn’t keep her, and so ‘Mia’ was brought back to the farm to be our ‘inside’ pet.  When Mia was about six months old, she managed to break her back leg while in her travel cage. As the break had also severed the nerve to her foot, she needed to have that leg amputated. We weren’t sure how she would cope with only having three legs, but she took it all in her (newly shortened) stride and a week after having surgery, she was outside climbing up poles as though nothing had happened! As Carlisle says, one less leg means less dirt to bring into the house and, more importantly for Mia, one less leg to have to keep clean! 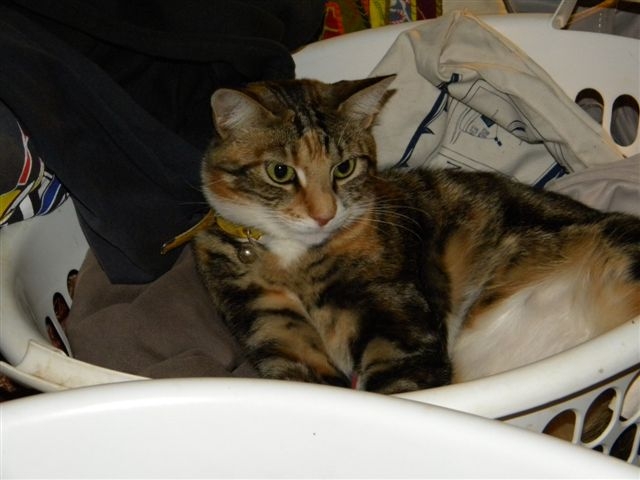 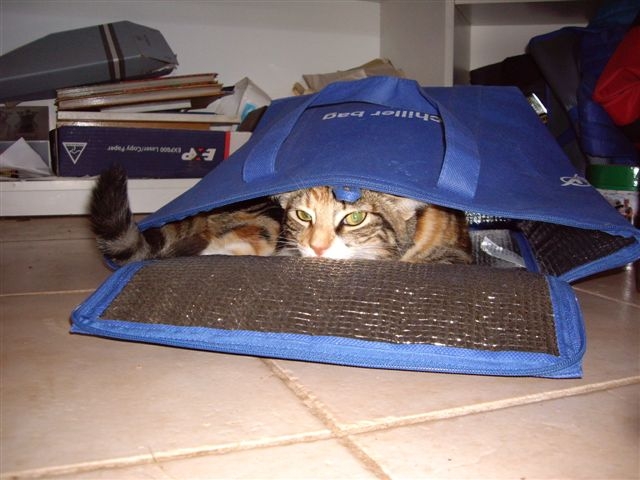 Tigger is Emily’s cat, and she was adopted from the Cat Haven when she was 10 weeks old. Tigger travels between Emily’s place in the city and the farm quite often, and happily adapts to which ever place she’s in. She is quite often found sleeping in the book shelves inside or under the shrubs outside, when she’s not trying to catch butterflies or moths!  She loves to play, and has quite a range of toys at both houses. 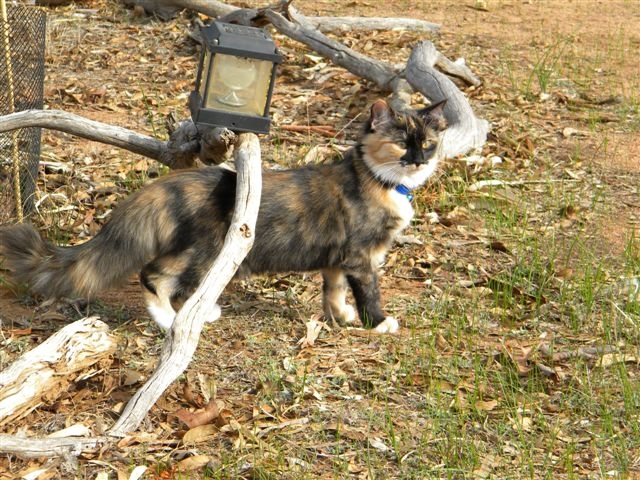 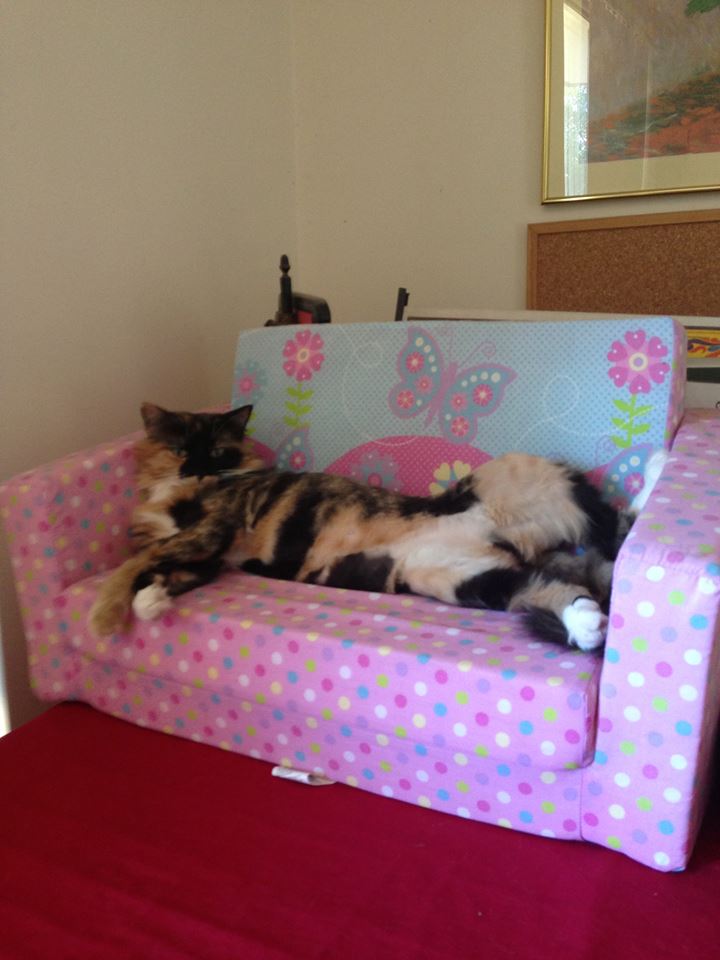 We breed koi in our garden ponds – which also double as fire retardants around the house – and these are sometimes for sale to dealers and to private buyers. Koi we have bred are now in many different environments from garden ponds to hospital courtyards and are in kindergarten and childcare centre aquariums. The breeding koi are all quality fish collected over 20 years and include the following varieties: kohaku (red and white), sanke (black red and white), shusui and asagi (blue and red, some with scales and some clean skinned), showa and utsuri (black with red and/or gold patches or stripes) and gin rin (pearl scaled) versions of these varieties. 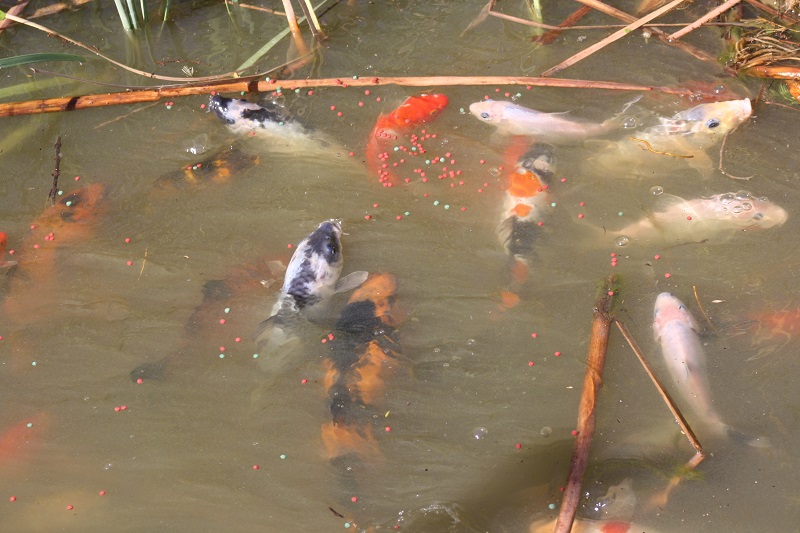 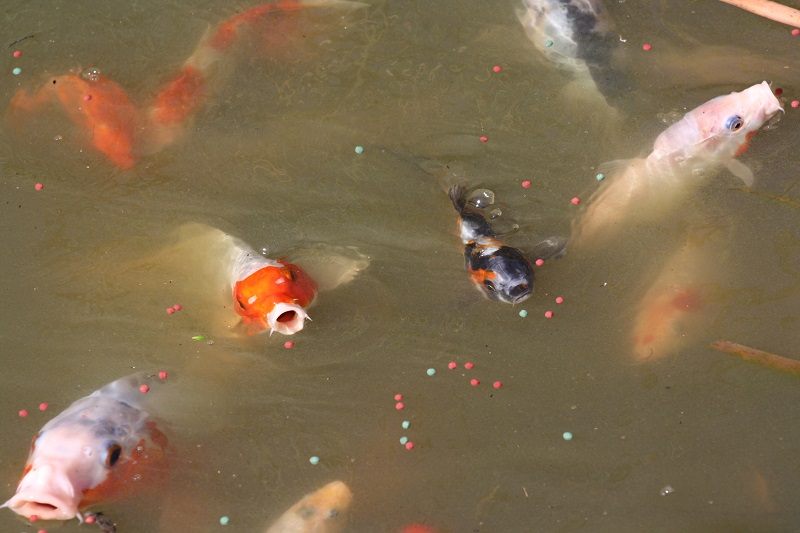 We have had a number of other interesting pets and farm animals over the years.  Edward & Edwina (The Emus) were with us since they were small stripy fluffy babies and were named after picture book emus. They were very tame and curious and enjoyed meeting people as well as the ponies and our other animals. Although they lived in their own bush paddock (called the “Emusement Park” by housesitters) they regularly made their way around the farm and turned up unexpectedly to raid the small bird feeders, share activities such as fruitpicking (they loved apricots and plums) or gardening, which Edward, in particular, supervised with interest. Their grunts and booming voices were a significant feature of our farm experience. Although we had a male and a female, they were not destined to be the breeding pair we once hoped they’d become, and when they matured, they went their separate ways. We occasionally spot Edwina in the distance on neighbouring properties, and we hope that Edward will return one day with his brood of chicks for a visit. 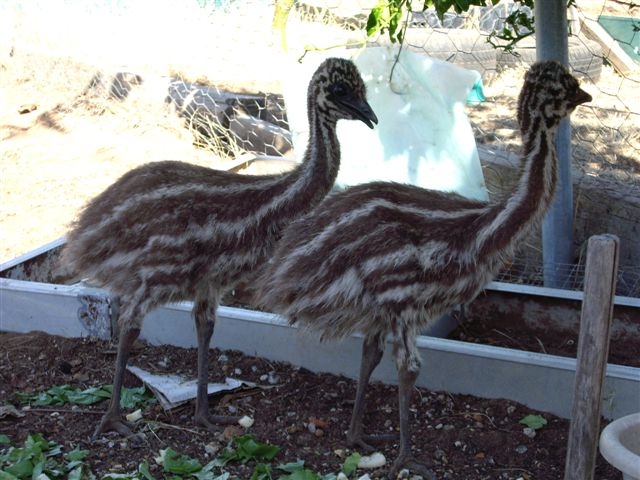 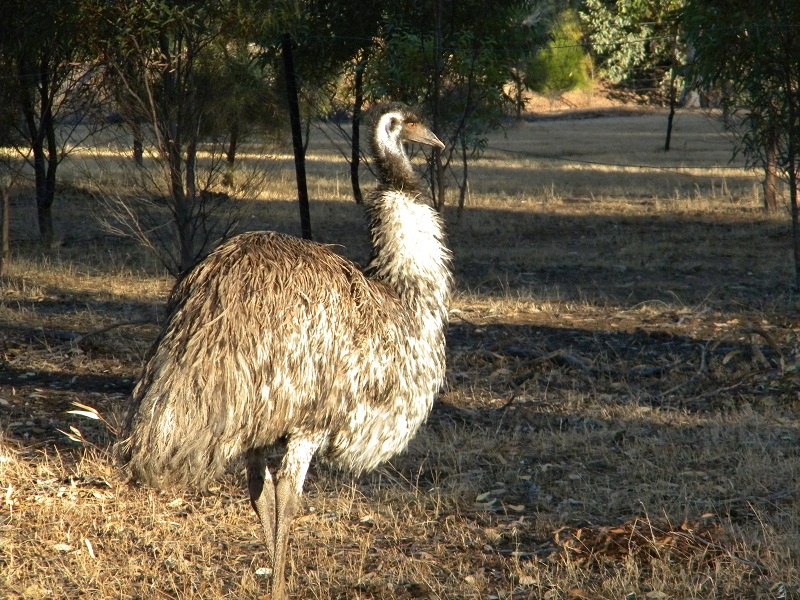 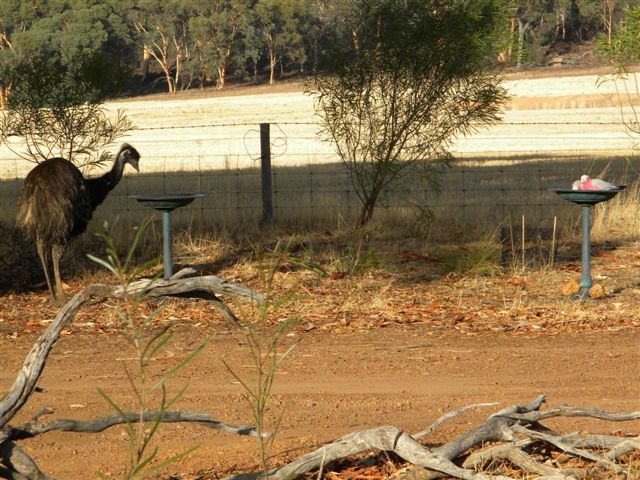