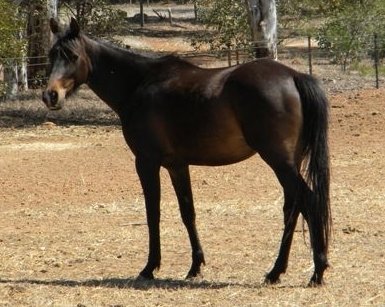 Witchery is a gentle dark brown anglo-arabian mare who was successful shown in hand by her previous owner. Witchery has an injury which prevents her from being ridden, however she is an outstanding broodmare who has produced two foals for us to date- PB Rapunzel by Gunnadorrah Tom Thumb (retained by the stud) and PB Calvin Klein by Glenormiston Dundrum, who has been sold to a wonderful eventing home.

Witchery is in foal to Glenormiston Dundrum and her foal is due in August 2014.